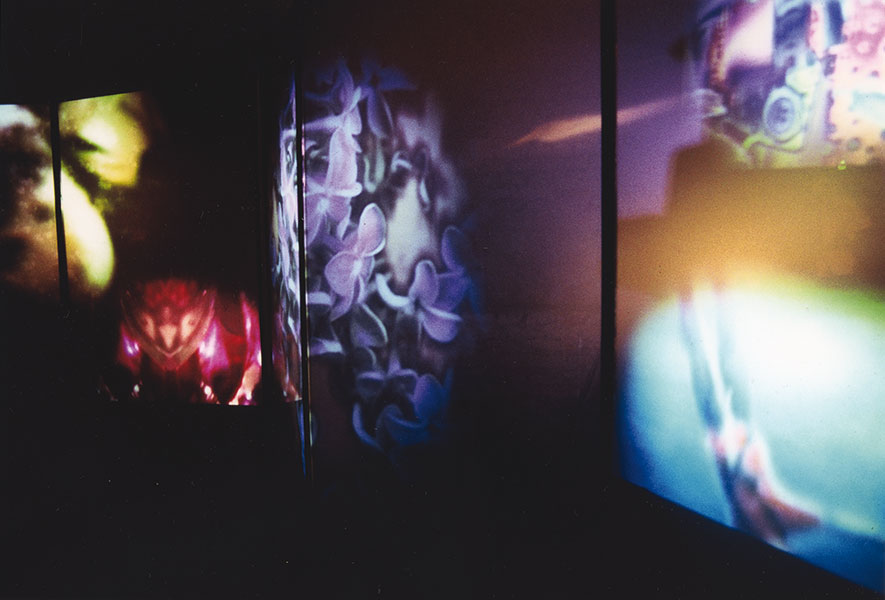 DR: Tell me something about your engagement in Sonsbeek.

EÖ: When I first was invited to participate in Sonsbeek 9 - EÖ: this happened shortly after Jan saw my piece in Das Lied von der Erde show in the Fridericianum Kassel - the first thing that came to mind was the legacy of this tremendously influential Sonsbeek buiten de perken event which took place in 1971.(Which also. coincidentally, is the year in which I was born.) A huge tent was installed in Sonsbeek Park where you could savor the latest in film&video art, which at that time, was of course still in its infancy as an art form. I think that, along with Panamarenko Aeromodeller and the conference hall, this was one of the strong points of the ‘71 exhibition; already there was a certain element of tension in the way the public and the private interfered each other...

DR: ...Which in turn has developed into a strong overall undercurrent in your work as a visual artist.


EÖ: I am very much intrigued with this dialectic of interior and exterior, private and public, both on an architectural level as in terms of sociology and psychology. Now although I no longer work - and never really worked - as an architect, my architectural training obviously informs a lot of what I do as a visual artist. I mean, you can just as well engage in the practice of architecture by means of images, by taking recurrence to behavioral patterns. And anyway I don’t believe it’s very fruitful to keep on thinking in terms of art and architecture - I don’t think there’s much of a rigid border there, at least not since Heidegger’s writings on that subject...But where was I?...


DR: We were discussing the thin line between private and the public, both in architectural terms as on a psychological level.

DR: I never told anything of kind. But please continue. The poles eventually done away with, I gather - and some other ideas came up in turn.

EÖ: Oh yeah. Well, I have this peculiar fascination for dark places - dark public places to be sure, meaning that they are dark to the point where they get instilled with a certain aura of privacy. Like the spaces around cash dispensing machines, for instance: they have a very private feel to them, yet still their overtly public in use and destination. And have you witnessed the size of those places? They are big enough to house a small party!...The dark corners of train stations, airports, transitory spaces of all sorts - these were the places I was looking for in terms of my first Sonsbeek proposal, which involved the installation of different upright , polished steel polls throughout the city of Arnhem. The pole you find in striptease bars and around which strip dancers wrap themselves. The idea of installing of these poles, which are intricately linked to a rather private, sexual experience, in a public space context first dawned on me when I was in New York. I thought about dancing round these columns that they are usually placed in front of buildings, like facade elements shielding the off the interior from the exterior. Of course there was also the smoothness, odd surface and tactility. Obviously people would, unconsciously or not, start touching these poles, and that would in turn trigger all kinds of memories and associations...It’s really a hardcore installation, as I’d like to put it, meaning heavy duty installation art - something really physical and tactile. You have to feel these works with your hands as much as with your eyes... I mean, I just recently went to visit the factory where these poles are being made, started to polish one pole by hand - surrounded by a predominantly male labor force, I don’t think I have to spell out the awkward ambiance of that moment - and it immediately got a really warm and glowing almost soft - like kind of quality. And you’re telling me this work is reminiscent of the cold. abstract grid aesthetic of your average modernist installation?? Please!

EÖ: Well, at first Jan quite explicitly asked me to take the crypt (of the Eusebius church, ed.). Obviously this had to do with the more or less subtly sexual overtones underlying the space in question - like it or not, crypts have a distinctly erotic quality to them, and he probably thought this was just the place for me to make a proposal. I don’t know maybe he thought a I could do a little Robert Gober routine or something [laughs]. Now, at first I didn’t think too much about that idea - it gets kind of tiresome to live up to this stereotypical gender bias, you know...I first came to Arnhem in August, and instead of checking out the exhibition sites I preferred to get to know some other participating artist - now there’s the real excitement in taking part in a show like this!! So when I eventually got to reconsider the project I saw there were a lot of elements in the crypt that harked back to reality of, say the park - I’d say they’re both very much sexually connotated places, for one. And of course the crypt is a quite beautiful place in its own right - there’s so much love and purity there, with little bits of ornament and vestiges of the past strewn all across, a whole string of architectural references... Also, the crypt space in fact looks like a landscape in itself.

DR: Or a dreamscape. Which makes for an altogether romantic environment.

EÖ: Well, for one, the LCD screen are really romantic things to me, technically speaking. You have to come closer to really see the image, so a certain element of intimacy invariably arises there. Moreover, the image also changes according to angle, to temperature and the like.., Certain materials have a potential for transformation depending on which angle you look at work, which I find very interesting, And what’s more, here's also the interplay between transparency and opacity, which I find equally intriguing.

DR: In any case you settled for a dark place after all.

EÖ: Even though I’m really afraid of the dark! And I don’t walk under trees either, mind you...
Honestly, it really is a challenge for me to work in the dark: I just spent one hour in the crypt this morning and that proved to be quite sufficient, thank you. It is really a site, that’s for sure. It’s not a place at all. We talk about places, spaces, and sites all he time, when in fact these are hugely differing concepts. Take for instance the dialectic of place and space: a house is a space, whereas my home or your home, or my favorite room in a house definitely is a place. And again, to a decorator or a craftsman it is just another space, as it is defined as such in his treatment of the space. The same also goes for the concept of “installation”: take any ordinary piece of kitchen equipment for instance - that’s an installation pure and simple. By the way do you know that “installation” actually derives from a technical Latin term installatio, which in fact meant the installing of high officials in the Roman church hierarchy? Installing, as in “investing with an office or dignity by seating in a stall or official seat”...

DR: No I didn’t know about that, thanks for sharing that piece of information. I find the reference to the kitchen equipment quite revealing, as the “semantics of the kitchen” prominently figure in some of your better-known works.


EÖ: Yes. It’s just that I find it really strange to see how people, after years of hiding away their kitchen equipment and utensils in generic kitchen stuff in full view of the visitors, water outlets and the like...Of course this no longer has to do with installation - this is all about generating a certain ambiance...

DR: And again we bump into the dialectic of inner and outer space, a generic tension permeating all of our works to this date.

EÖ: That’s because I think tension is a good thing. It makes you laugh, makes you cry, and, most importantly, in the end it makes you think. I’d love to be a more harmonic person, being really liquid in a way, but then again tension is always nice.


DR: Finally, there was in fact a third proposal you seem to have forgotten about, especially designed for the Sonnsbeek Park...

EÖ: Oh yeah, I nearly forgot to mention my Sonsbeek pavilion!! This was actually conceived of as a marble, sheets of glass& liquid crystal wall structure. A mobile living unit consisting of two corridors you could walk through, with video images being projected on either side of the wall in the middle of the pavilion. Of course there’s an obvious reference to the Mies van der Rohe pavilion in Barcelona - I really like the idea of a pavilion as opposed to a mere house, which would be a rather pointless statement in a landscape park like Sonsbeek.