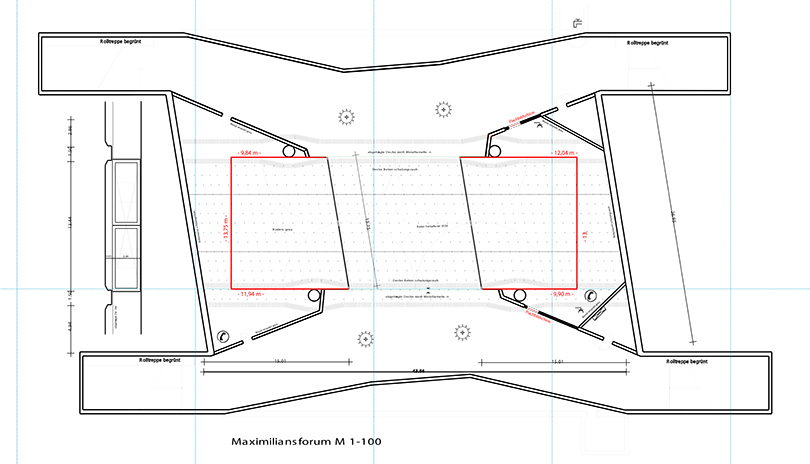 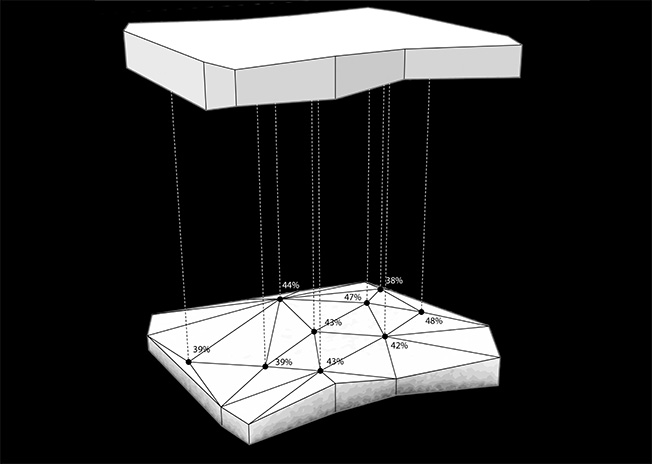 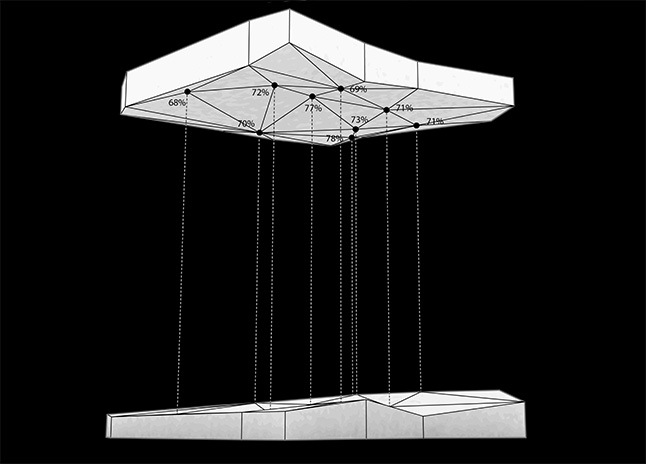 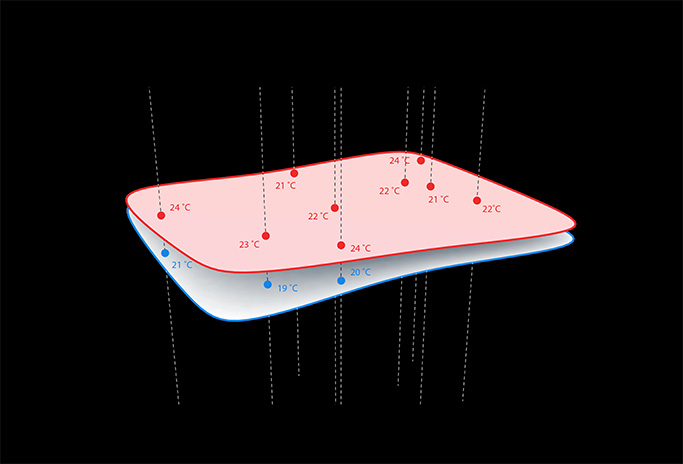 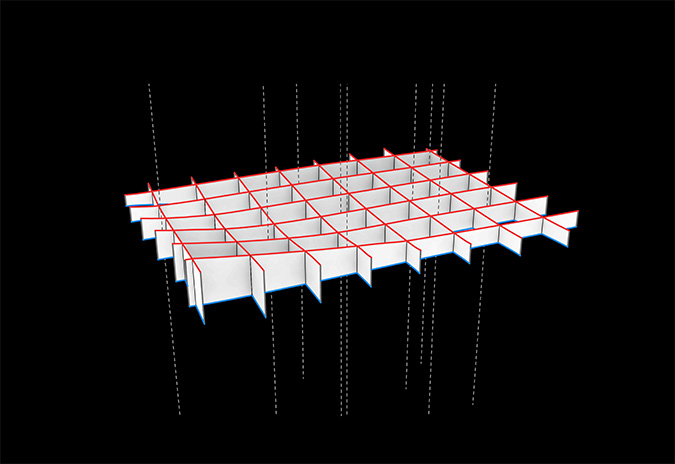 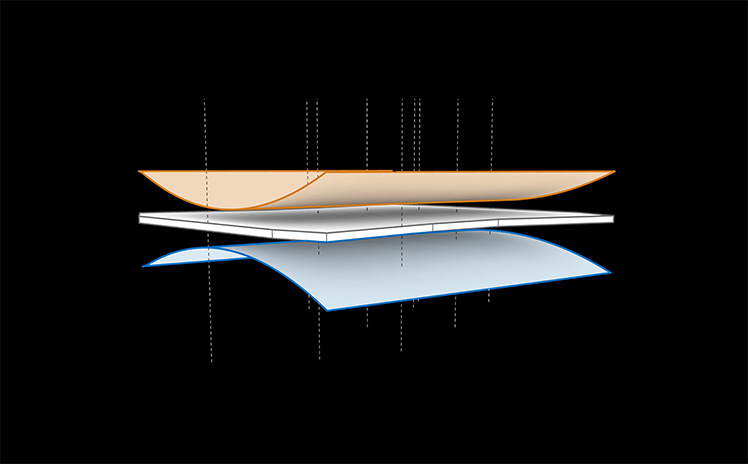 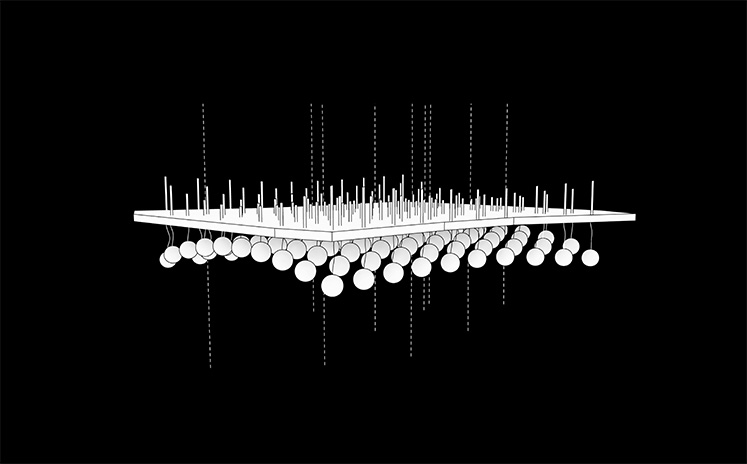 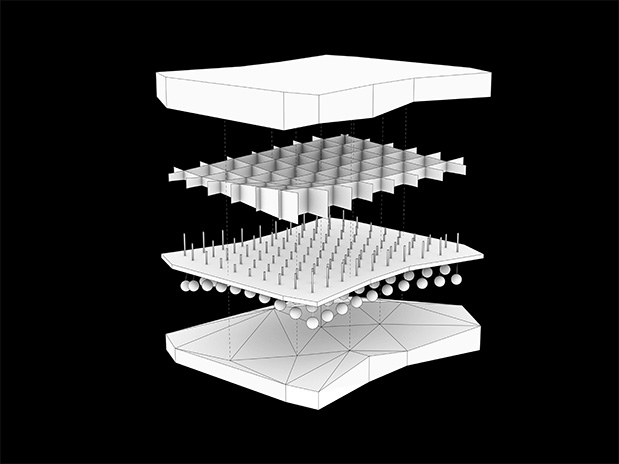 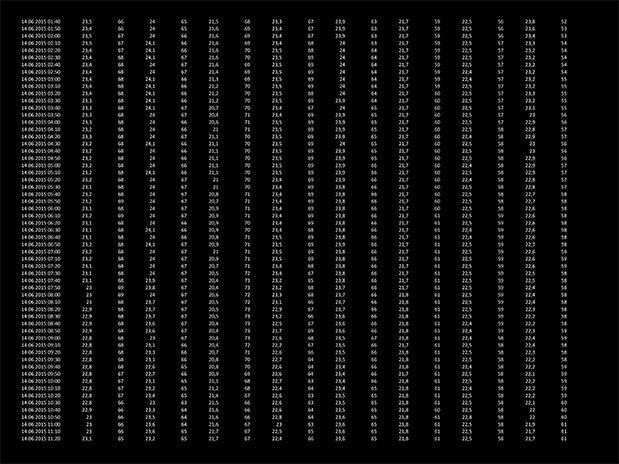 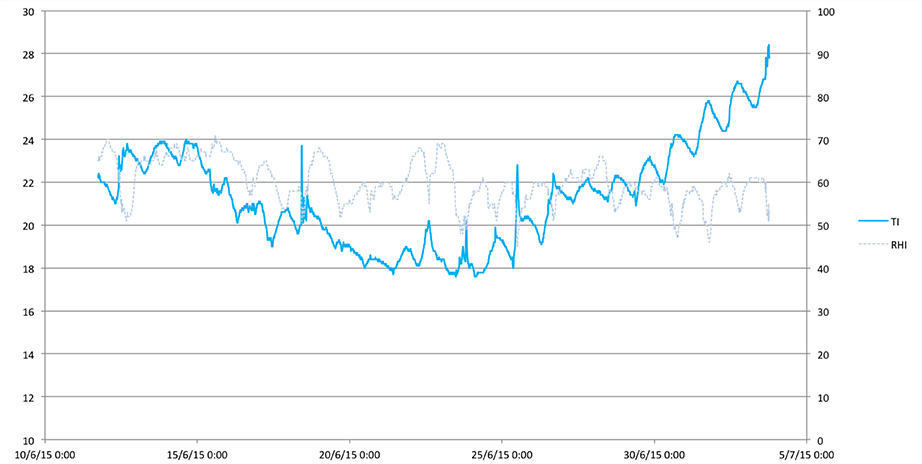 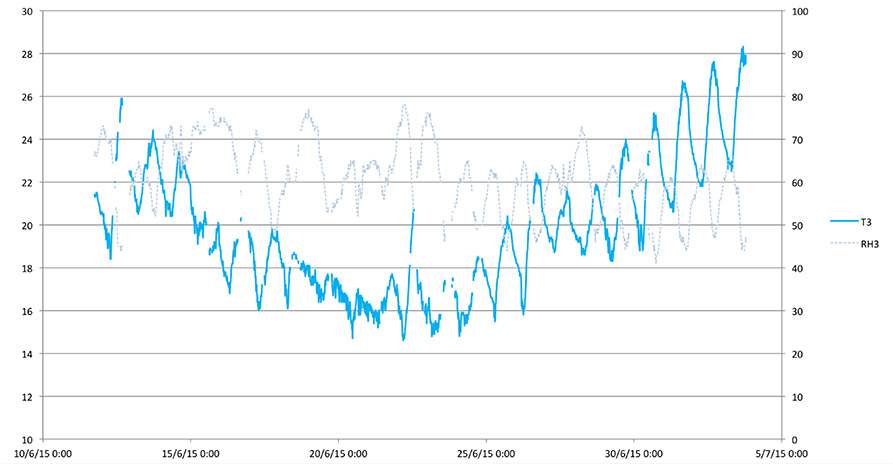 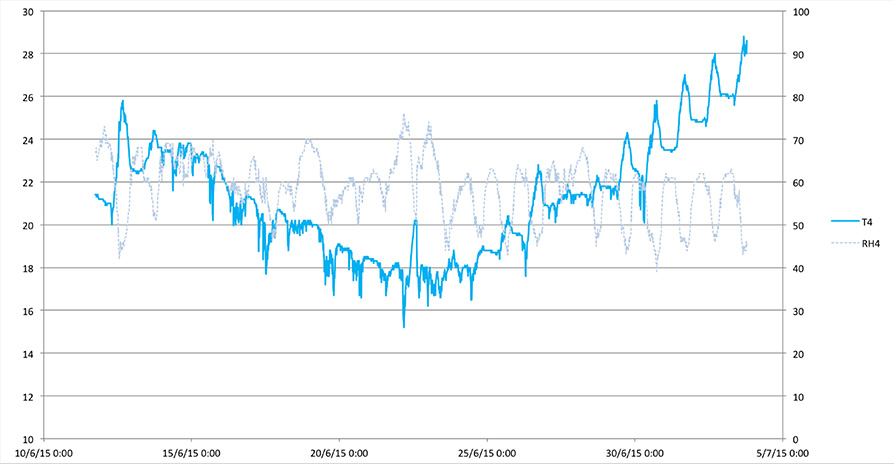 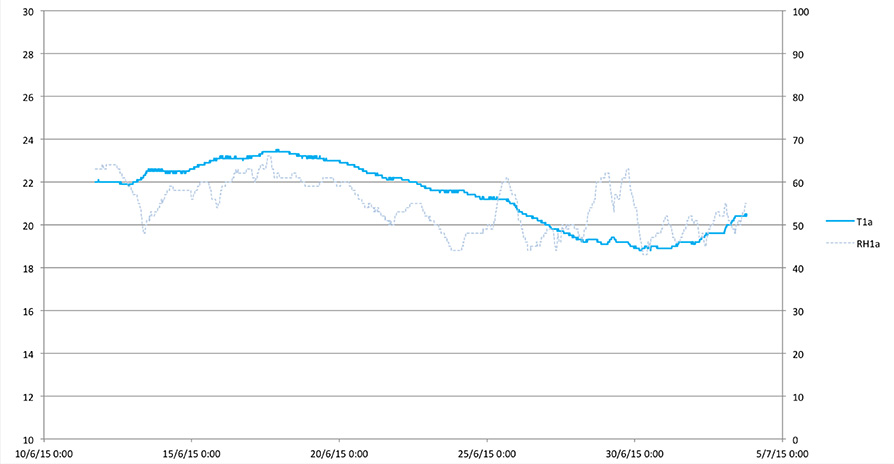 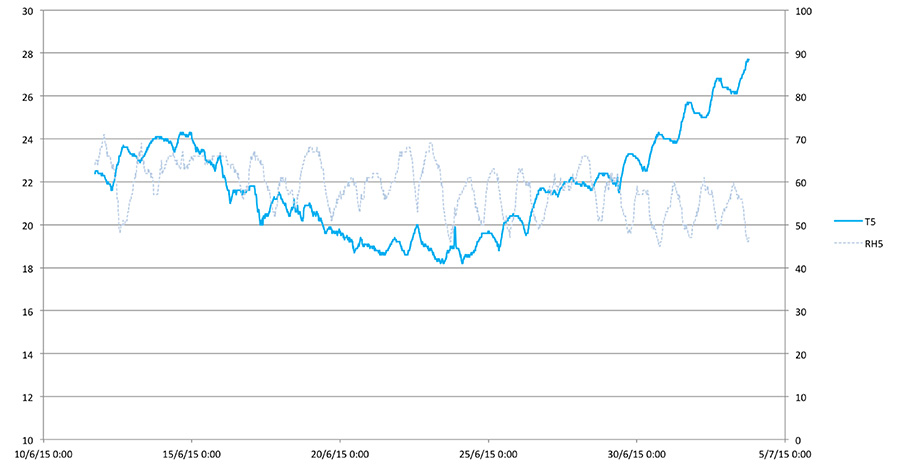 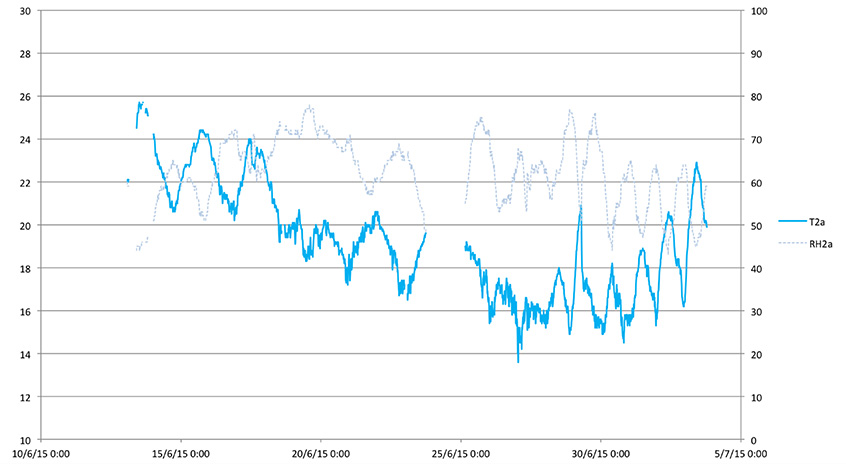 MaximilliansForum is a exhibition space located in the hearth of city center in Munich, Bavaria, Germany which is having different qualities then the usual exhibition spaces. "Symbiosis in Maxforum" proposes a new norm of temperature for semi outdoor public spaces. By measuring in real time temperature variation, wind speed and humidity "Symbiosis in Maxforum" observes, quantifies and records the climate variations in this underground space. The recorded data aim to create a base for the optimum temperature for perception, keeping the spectator attracted to the artwork, and to the existing architectural space.
The work/course* “Symbiosis" is to represent the complex but less explored domain of interdependent relation between artwork and the place, where artwork is shown as sensory space. “Symbiosis” illustrates itself within the realms of contemporary art exhibition criteria. The core intention of the approach is to train the sensorial experience and to recognize the relationships which define the conditions of space in terms of perception and execution parameters for architecture and artwork. Students are expected to show their individual approach to the basic elements of an exhibition: space and artwork. Alongside with discussing the influence of the exhibition space and exhibition architecture onto the human body and psyche, and the interaction between space, body and artwork, the participants are encouraged to actively participate in each stage of the course by writing journals, making or collecting visual material related to the topic, and expected to develop their own ideas. Course aims to promote the importance of symbiotic relationship between the artwork where it is showcased in and redefine the importance of living matters like air, light, humidity, windspeed, temperature, acoustics considered as living things as suspending or encouraging perception surrounding the artwork and architecture. Reforming the invisible, matter, void, quality, comfort in order to bring consciousness to museum and exhibition space architecture, designing exhibition displays, architectural and display materials for the present and future generations of architects to come. Our pilot project places are Deutsches Museum, the Pinakotheken, Brandhorst Museum, Haus der Kunst, Kunstverein, Sammlung Götz, Max Forum, Orangerie, Amelianburg, Louis Vuitton, Maxforum, Villa Stuck, and Architecture bookshop located in the city of Munich, Germany.
.... "There is a underground space in the heart of the city in Bavaria, Munich. About 11 degrees below today, for contemporary art, design and architecture shows. Besides all the qualities of this space, there are plants that are almost programmed to be wild at its entrances and over its escalators. We have no information why these plants are placed in the most expensive street of this city, even Germany, but I would like to keep the impact that their “hybrid” state Daniele Santucci says when I asked him -“why - I - am this way”- , I want to remember them in this hybrid state, or perhaps so that nobody takes it upon themselves cleans them away. This is the only place that reminds me of my childhood in this city, where I don’t know how much I will spend of my remaining life. May I say that preserving them will give me back my childhood? Preserving...as they are death. and they are...A girl whose father brought the first escalator application to a building in Turkey, same girls' fishing adventures with her grandmother... collecting to boat every morning from that humid place, the very same plants next to hers family weekend home... where her aunts lovers hide themselves to see her beautiful aunts...what about an other unfortunate heroine of “Irréversible”... and an other heroine walking in front the blue tiles a.k.a “Jackie Brown”. This space makes me feel as if I live next to a favela in São Paulo. I wonder...What would Rem Koolhaas have done if he had seen this place when he was building an elevator for the vertical favela? -The spontaneous architecture (“wild” forms, according to would – be elegant terminology) prove greatly superior to the organization of specialists who translate the social order into territorial reality with or without orders from economic and political authorities.- There is an important reason that this uncanny place can only remain in the Sensory Space. It is supposes to be a exhibition space... but whenever I enter in it.. all these subjective memories takes me all over again. There are other things that this place reminds me: it makes me say that I found myself in love with in this underground passage. As far as back the sixth century B.C., for instance, philosopher Parmenides held that our memory resided in a unique place between light and heat, cold and dark, at the center of the bodies. If this relationship was disturbed, it resulted in amnesia.*